13.1 Bismuth Telluride-based thermoelectric modules are designed primarily for use in cooling or combined cooling/heating applications where applied electrical power creates a temperature difference across the module. By using the modules "in reverse," however, whereby a temperature differential is applied across the faces of the module, it is possible to generate electrical power. Although power output and generation efficiency are very low, useful power often may be obtained where a source of heat is available.

13.2 A thermoelectric module used for power generation has certain similarities to a conventional thermocouple. Let us look at a single thermoelectric couple with an applied temperature difference as shown in Figure (13.1) 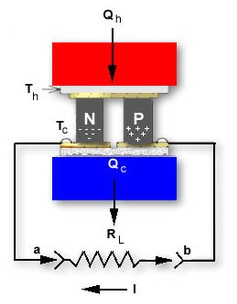 With no load (RL not connected), the open circuit voltage as measured between points a and b is:

When a load is connected to the thermoelectric couple the output voltage (V) drops as a result of internal generator resistance. The current through the load is:

The total heat input to the couple (Qh) is:

The efficiency of the generator (Eg) is:

We have thus far discussed an individual thermoelectric couple, but since a complete module consists of a number of couples, it is necessary to rewrite our equation for an actual module, as follows:

It must be remembered that module Seebeck coefficient, resistance, and thermal conductance properties are temperature dependent and their values must be calculated as described in Section 11, paragraphs 11.2 through 11.2.4. As an alternative to these calculations, however, generator performance may be reasonably approximated through the use of the data shown in Appendix A. In either case, the values of SM,  RM, and KM must be selected at the average module temperature Tavg where:

The power output (Po) from the module in watts is: 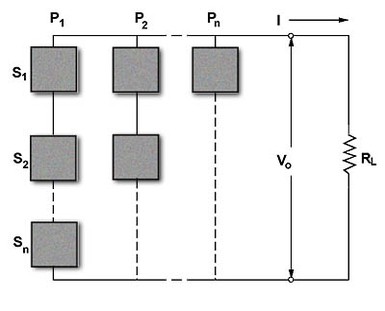 The current (I) in amperes passing through the load resistance RL is:

The output voltage (Vo) from the generator in volts is:

The Output Power (Po) from the generator in watts is:

The total heat input (Qh) to the generator in watts is:

The efficiency (Eg) of the generator is:

13.3 DESIGN EXAMPLE: To illustrate the typical design process let us analyze a requirement for a 12-volt, 1.5 ampere thermoelectric power generator. The generator is needed to power telemetry electronics at a remotely located oil pipeline where the hot, continuously -flowing oil produces a 130°C pipe casing temperature. Flowing water (having a temperature of 10°C) also is available at the remote site, and it has been determined that an efficient water-cooled heat sink can maintain the TE generator cold-side at a temperature of +30°C. We will use Appendix A to obtain the values of SM, RM and KM for our calculations.

To begin the design process we will review the system parameters and make some preliminary calculations.

It is usually desirable to select a relatively "high power" thermoelectric module for generator applications in order to minimize the total system cost. For this reason we will choose a 127-couple, 6-ampere module to be used in our design.

From Appendix A for our selected 127-couple, 6- ampere module, the following values are obtained at Tavg = 353.2K:

The required power for the load has been calculated as 18 watts. It is now necessary to determine the minimum number of modules needed to meet this load requirement. The maximum output power from one module is:

The minimum number of modules needed is:

Because maximum generator efficiency occurs when RGEN = RL, it is desirable for most applications to select the series/parallel module configuration that will best approximate this resistance balance.

One possible exception to the equalizing RGEN with RL is in the situation where a relatively low current (in the milliampere range) and moderate voltage is required.

In this case, the connection of all modules electrically in series may give the best results.

As a starting point in the evaluation of any thermoelectric power generator, it often is helpful to first examine the straight series-connected configuration. The resistance of a series string of eight modules is:

It can be seen that the 24.8 ohm generator resistance is considerably higher than the 8.0 ohm load resistance, thereby indicating that a straight series module connection probably is not the best arrangement. For the all series condition where NS = 8 and NP = 1, the output voltage is:

While 6.2 ohm RGEN value does not exactly match the 8.0 ohm load resistance, this value normally would be considered as being within the satisfactory range. In any event, this is the closest resistance match that can be obtained with the selected module type. The voltage for this arrangement (12.49 volts) is calculated as follows:

We can now see that Vo is quite close to the desired value and it is apparent that we have obtained the optimum series/parallel configuration. If "fine tuning" of Vo is required, it will be necessary to accomplish this either by some form of electronic voltage regulation or by externally altering the applied temperature differential (DT). In certain instances it will be found that the output voltage is significantly out of range despite trying all possible series/parallel combinations. In this event it may be necessary to use an alternate thermoelectric module having a different current rating and/or number of couples.

It is now possible to complete our design analysis by determining power levels and efficiency.

Since we have established Vo, output power (Po) can be simply calculated:

The total heat input (Qh) to the generator is:

The generator efficiency (Eg) is:

The heat transferred to the cold-side heat sink (Qc) is :

The maximum allowable thermal resistance (qs) of the cold-side heat sink is :

For any thermoelectric generator design it is always desirable to maximize the applied temperature differential in order to minimize the total number of modules in the system.

This situation can be clearly seen in Figure (13.3). Module requirements for a typical 12-volt, 1-ampere power generator are plotted at several fixed values of Th based on the use of 127-couple, 6-ampere TE modules. From this graph, it is evident that a very large number of modules is needed when the cold side temperature (Tc) is high and the temperature differential, therefore, is small.

Performance of the cold-side heat sink is of the utmost importance and its thermal resistance must be extremely low.

In many cases, cold-side heat sink design will prove to be the most challenging engineering problem. 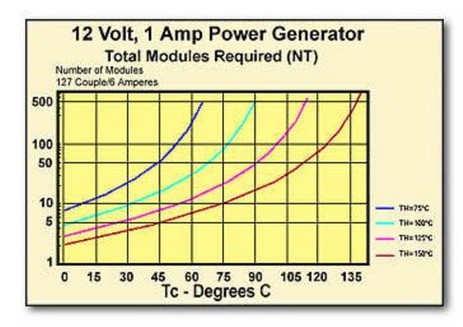 13.4 USE OF THERMOELECTRIC MODULES IN A CALORIMETER: A lesser, yet viable, application for thermoelectric modules operating in the power generation mode is in the construction of calorimeters.

The conventional calorimeter uses common thermocouples for heat measurement based solely on the Seebeck effect. Through the use of a multi-couple thermoelectric cooling module, it is possible to fabricate a calorimeter having a sensitivity (output voltage per unit of heat flux density) as much as 10 to 200 times the sensitivity of a standard copper-constantine thermocouple. When used in a calorimeter application, the thermoelectric module is often referred to as a thermopile. The open-circuit output voltage (V) of a single thermoelectric couple, as described in paragraph 13.2 and illustrated in Figure (13.1), is:

For an actual TE module having a number of couples and a Seebeck coefficient of SM, the output voltage (Vo) is:

The heat flow through the TE or "thermopile" is:

The total cross-sectional area (AM) of all elements in the module is:

The heat flux density (q) in watts/cm2 is:

Most standard thermoelectric cooling modules may be used in a calorimeter application but improved sensitivity may be realized by modifying the length-to-area (L/A) aspect ration of the TE elements.

A relatively large L/A ratio resulting in a tall and "skinny" element will produce the best calorimeter sensitivity. To illustrate this situation let us consider the following:

The sensitivity of a module as a calorimeter (Sc) is:

Since N x A = AM, the expression can be restated as:

From this equation, it is evident that calorimeter sensitivity is directly related to the length (L) dimension of an element and it is desirable, therefore, to select a thermoelectric module having the largest possible element aspect ratio. Be aware that there are practical limits on element geometry due to the fragility of crystalline Bismuth telluride material. Working within these limits, however, it is possible to fabricate custom modules that are particularly suited for calorimeter use.