This parameter is very important for a CCD sensor, as it expresses his efficiency, the capacity to capture the photons which strike him and use them to produce the outgoing signal, to the various wavelengths . It is expressed in percent at a certain wavelength . For example a value of 40% means that for 100 photons which strike the sensor 40 are really captured and changed in electrons.

The used manufacture techniques considerably affect the spectrum response of the sensor. As we can see from the image, the various models in fact present different responses.

Going back to the example of the glasses, it is as there were drops of various dimensions.The littlest ones represent the wavelengths which tend to the blue, while the biggest ones tend to the red. Not all of the drops are received in the same way: the little ones can dissolve before reaching the bottom of the glass, the big ones can not be taken by the glass.

Technically speaking, the CCD loses his sensitivity in the right extreme of the spectrum (infrared), because the photons have not enough energy to produce electrons inside the cells. From the other side (ultraviolet) the photons are not able to penetrate into the CCD quite deeply to enter into the cells and they are stopped by the superficial layers.Between these two extremes, interference effects can cause various peak and subsidence values in the response.

In general, major it is the Qe value, better is the device . Since the quantum efficiency will be high only for certain values in any case, it is important choose the sensor most suitable for its shooting demands . We need to point out that values that could seem low, as 10-20% are not at all to be snobbed, if one considers that 5% is seldom reached with the normal films! 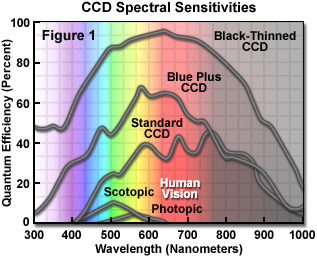