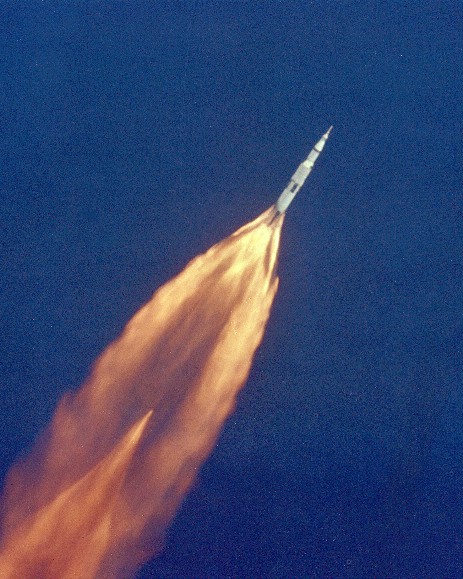 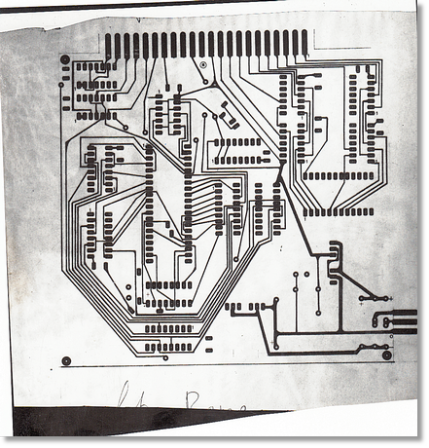 (1979) Fotomeccanica della mia prima scheda basata su 8080A con 1Kbyte RAM
(1979) Photomechanics of my first card based on 8080A with 1Kbyte RAM
I lived my adolescence in the sixties / seventies when the space conquest was in full swing, I was 12 years old when I went all night on July 20, 1969 in front of a BW TV to follow Neil Armstrong, Buzz Aldrin and Michael Collins in their historical enterprise. Yeah I had a long sequel of passions and hobbies and it was also easy to add that to the missile.
In this discipline there are models in which it is really difficult to dynamically interact to control the trajectory and generally the flight, if you choose to make liquid propulsion engines instead of solid, the difficulties increase exponentially, but you know that it is more Harder and more beautiful! Throughout this area, they are adopting aerodynamic and propulsion solutions that potentially seek to prevent catastrophic events. In reality, however, the statisctics of the successes are truly low, and there is a need of a great perseverance and a continuous refinement of the techniques to hope that the model built will perform something like what you want. My "prince" desire was to be able to control it in the thrust of motors and on the dynamic control of stability (inverted pendulum problem). All this accomplished with the discrete electronics of then was really a problem. It is clear that when the first microprocessors appeared on the market it seemed to me that at last I could solve many problems by definitively abandoning transistors and logical gates!
Ovviamente non ci sarei riuscito neanche avessi avuto a disposizione un i7 perché allora mi sarebbero mancati i sensori inerziali e poi gli attuatori etc.etc ma almeno sognare era possibile.
Per mia fortuna  e di tutti i miei vicini di casa, ignavi del scampato pericolo, non realizzai mai un controllo attivo del mio propulsore a liquido che giá aveva di per se una lunga sequela di problemi ed era giá sufficientemente pericoloso.
Infatti era piú facile vederlo andare a fuoco sulla rampa di lancio (se non qualche volta esplodere) che vederlo partire.
Comunque una volta mi ha funzionato (4s senza esplodere) e una seconda volta é esploso in volo a qualche decina di metri di altezza, per me due grandi successi!
Una precisazione, negli anni sessanta/settanta dalle mie parti (periferia di PISA) l'urbanizzazione era agli inizi ed i ragazzi disponevano di vaste aree di campagna in gran parte composte da paludi, inoltre, cosa non da poco conto, era possibile accedere all'acquisto di prodotti chimici senza nessun controllo!
I would not have succeeded, even if I had an i7 available, I would still have had problems with inertial sensors or with actuators, but at least dreaming was possible!
For my good fortune and all my neighbors, ignorant of the risk of escaping, I never realized the active control of my liquid propulsion that already had a long sequela of problems and was already sufficiently dangerous.
In fact, it was easier to see him burn on the launch ramp (if he does not explode) instead to see its liftout.
However once has worked (4s without exploding) and a second time was exploded in flight to some ten meters high, for me two great hits!
In the sixties / seventies of my parts (PISA suburbs), urbanization was at the beginning and the boys had 'available' vast areas of country largely made up of marshes. Moreover, was possible to access of purchasing of chemicals without any control! 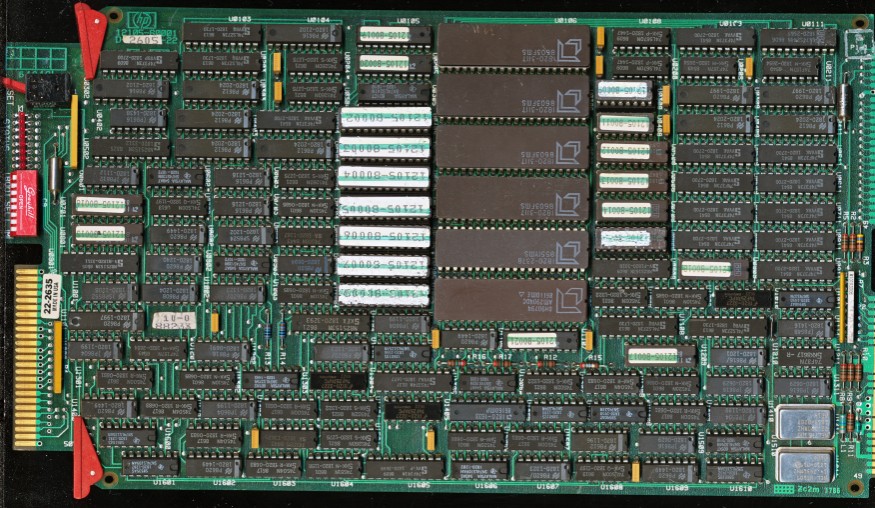 Interessante sito sullo sviluppo delle memorie di massa.
But it is known that a "mental bug" can persecute you for a long time until you find a solution, at least on paper.
I continued my microprocessor study (8080) until I had the opportunity to start working for one of the very few Italian companies that made hardware and software starting from their own idea (MICROMEGAS). Here I had the opportunity to grow a lot, learning from those I considered my gurus (the boss) as Prof. Molnar and Ing. Andreoli. For what I was able to learn I would had to pay them instead of receiving a salary! It was in the late seventies that microprocessors had clock frequencies of up to 4/5MHz and were almost all CISCs while the available RAM was at most 32Kbyte. In the machines we made the dissipations were monstrous with gigantic power supplies that provided currents of 20/30 A, also the cards were large size and the devices used today would look really out of measure like the 8" Floppy Disk and the Hard-Disk always from 8" weighing several Kgs.
Although for those times these CISCs represented the state of the art they had access to I/O even 10 times slower than their base clock.
Obviously we used the assembly language to program and we always had the instructions list with their consumption of clocks, the flags involved, etc. All issues not perceived by today's programmers.
Over the next 20 years, microprocessor technology has evolved, the first RISC (AMD 29K) and the first DSPs (TMS320) have emerged, continuing to increase internal peripherals in addition to volatile memory or less. But the increase in clock frequency was slower than the increase in peripherals or internal memory. In the 1990s, a good PC had a 50MHz clock and a microcontroller could have a maximum of 16MHz.
It took another 10 years for the first microcontrollers to touch the fatal 100MHz and beyond. (Interesting site showing the growth of the benchmark over time)
A processor that hit me very much in the early 2000s was the SX48 of the SCENIX (UBICOM) this was compatible with the PIC 16C5x but it was much faster, it has most of the instructions in a one clock and could reach (in some Versions) 100MHz as timebase!
It has four 8-bit ports and two 16-bit timers, and had a 4096 word FLASH by 12 bits and 256 bytes of RAM.
This went into discontinuity in 2009, but although can be bought by Parallax that has acquired all rights.
This small microcontroller allowed very fast I / O interactions (10/20 ns) and have a very efficient interrupt response time (3 clocks).
Interesting site showing timeline of mass storage development 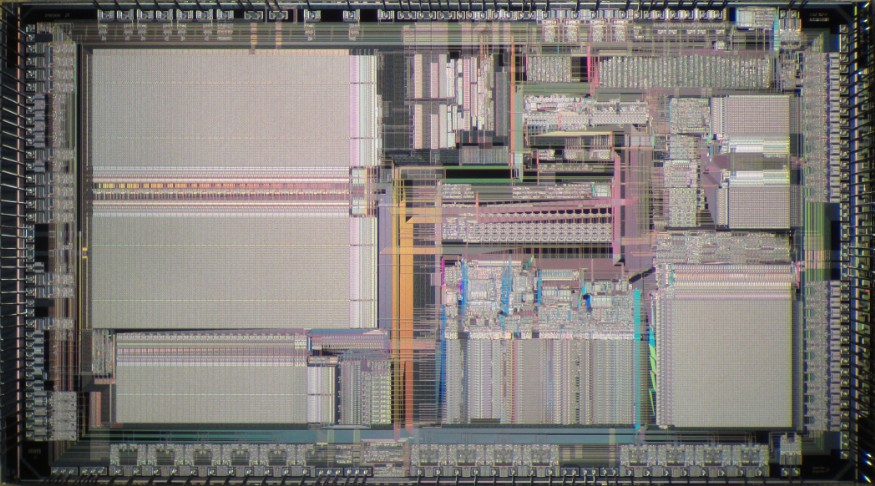 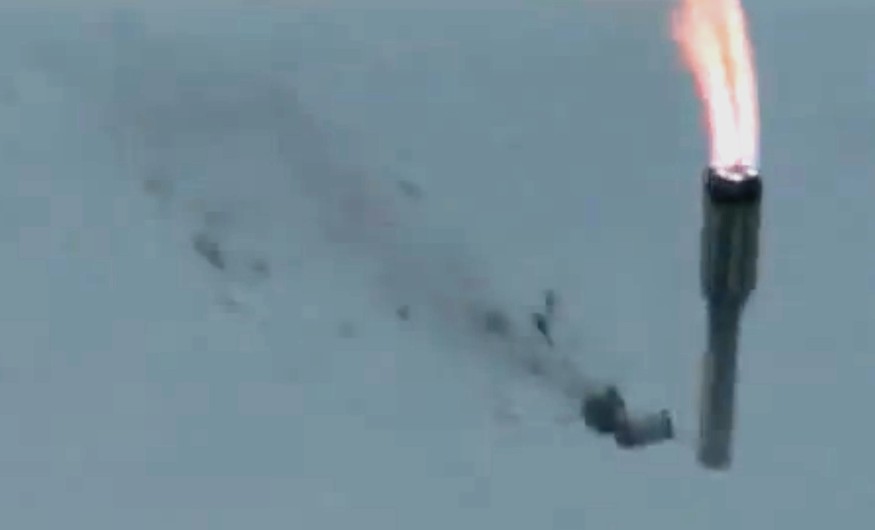 In the years 2000 the first appeared the Blackfin series of Analog Device, a series of 16/32 bit DSPs with operating frequencies from 200 to 600MHz.
In 2010, the BF592, a DSP of the Blackfin series, is simple to use but with great performance, 400MHz clock frequencies, internal peripherals and fast RAM for data and code.
The BF592 is a smaller version of the larger models but has the same efficiency when accessing to I / O ports has a small size package and low power consumption.
In my opinion for its properties, is the new standard for I / O interaction speed and math computing compared with its very low cost.
To conclude, in my 30 years of activity I have designed many boards with microcontrollers or DSP, in the content of the BLACK BOX page are listed those made in recent years but I fear that this list will continue to grow, both for job demands and also for The crazy quest for the perfect BLACK BOX...for What do? Maybe to build a rocket with dynamic trajectory control ...
NOTE: Within this document I use terms: processor, microprocessor, microcontroller, DSP, RISC, etc. As they were the same thing, absolutely so it is not! But for my reasoning, all of these names fall under the same concept: they are a black box that I can program in order to create something outgoing based on what is present in the input.
P.S. I do not have a lot of documents and / or photographs of the past, but I found some books (of which I always have the printed copies) to which I devoted a careful reading and study and then represented a big mine of information and stimulus.
ATTENZIONE
Tutto il materiale qui presente è riportato per uso esclusivamente personale, senza fini di lucro e con la sola intenzione di salvare dalla distruzione opere di ingegno che hanno contribuito alla formazione di moltissimi tecnici elettronici ed informatici negli anni '80. Permettere alle nuove generazioni di accedere a questo materiale, che si sta facendo sempre piu' introvabile, mi sembra una cosa utile e doverosa. Salvo quanto altro espressamente consentito dalla legge sul diritto d’autore, non è consentito modificare o sfruttare commercialmente materiale scaricato in mancanza di espresso consenso da parte del titolare del diritto di proprietà. Qualora la presenza di parte di esso dovesse rappresentare una violazione di copyright, o nel caso qualcuno si senta danneggiato dal loro inserimento in questa pagina, si prega di segnalarmelo e provvederò alla sua immediata rimozione.
WARNING
All the material present here is reported for personal use only, non-profit and with the sole intention of saving from destruction works of genius that have contributed to the formation of many electronic and computer technicians in the 80s. Allowing new generations to access this material, which is becoming increasingly unavailable, seems to me a useful and necessary thing. Except as otherwise expressly permitted by copyright law, it is not permitted to modify or commercially exploit material downloaded without the express consent of the owner of the property right. If the presence of part of it represents a copyright infringement, or if someone feels damaged by their inclusion on this page, please report it and I will provide for its immediate removal.
Back to content